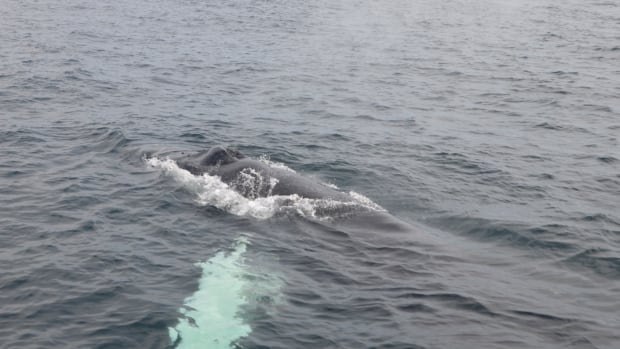 The rescued whale is familiar to the area and based on the unique scars and patterns on its fluke, the Centre for Coastal Studies identified it as nine-year-old ‘Hangglide.’ (IFAW)

A team of rescuers managed to free a humpback whale caught up in lobster trawls in the Bay of Fundy on Tuesday.

The Campobello team successfully disentangled the struggling leviathan, roughly 80 kilometres offshore in the Bay of Fundy, according to a release from the International Fund for Animal Welfare.

The rescued whale is familiar to the area and based on the unique scars and patterns on its fluke, the Centre for Coastal Studies identified it as nine-year-old “Hangglide.”

The release said the whale was caught up in two lobster trawls and anchored to the sea floor, unable to free itself.

Since humpbacks must resurface to breathe, it would have not survived long on the sea floor.

“We’re lucky it was a clear day,” said Mackie Green, with the Campobello Whale Rescue Team. “If there had been bad weather, that whale could have easily drowned before we got to him.”

Since the rescue took place so far offshore, Greene asked the Department of Fisheries and Oceans for safety support. DFO sent two vessels to accompany the team’s zodiac.

In order to get close enough to disentangle Hangglide, the team attached their boat to the whale.

“So, they proceeded to begin the disentanglement, which involves actually tying a keg [for flotation] — in this case it was their zodiac, they actually tied their zodiac to the whale — so they could inch, gradually towards it,” said Andrea Krebs, speaking for the IFAW.

After four hours of painstaking work, the team was then able to cut the whale free.

Humpback whales are easily identified by their white belly, dark-coloured back and massive pectoral fins, which can measure up to 4.5 metres in length — the longest appendages in the animal kingdom.

According to DFO, the whales migrate through Canadian waters twice per year and are a common sight in Maritime waters during the summer.