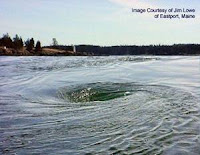 Being stationed at the most northern Coast Guard station on the East Coast certainly has its share of challenges. For one thing, the water temperature this winter averaged 37 degrees and the rocky coast is unforgiving to careless or unlucky mariners. But perhaps the greatest challenge of all is dealing with the sheer force of the water brought in by the 22-foot tides and six knots of current that flow through the deep channels of the St Croix River.
The Old Sow, a geological feature off Eastport, is home to the largest tidal whirlpool in North America. Extreme tides and bathymetry help create a unique vortex that can create a 10-foot depression on the water’s surface as millions of gallons of water flow quickly past Eastport. For the Coast Guard men and women in Eastport, the extreme challenges of nature bring only one response–if you can’t change it, use it. So personnel at Sector Northern New England found themselves asking, why can’t we harness the immense and predictable power of the tides to power the Coast Guard facilities here?

So it is fitting that on Earth Day, Sector Northern New England, in a partnership with the Coast Guard Research and Development Center in New London, Conn., announced a plan to test tidal generators off Station Eastport.

“With 22 Coast Guard units guarding an area spanning over 5,000 miles of coastline, Sector Northern New England strives to be good stewards of the environment and the taxpayer’s money as we serve the public every day,” said Capt. James McPherson, commander of Sector Northern New England. “As protectors of the environment, we feel a special responsibility to pursue renewable energy sources to help decrease our dependency on fossil fuels, seeking to keep the coast clean and beautiful.”

Through federal funding, $100,000 has been made available for qualified industry experts to develop and test in-stream tidal equipment this summer. McPherson said the reaction from the local community has been extremely supportive and the Maine state and congressional delegation participated in the Earth Day press event at Coast Guard Station South Portland. Sector personnel wanted fast action so the proposals are intended to test actual generators in the extreme currents and tides. McPherson added that once completed, the station would be the first federal facility in the continental U.S. to use tidal power.

“Most people are aware of the Coast Guard’s role in protecting the marine environment, but we also have responsibilities to the taxpayers too,” said McPherson. “Nature provides other opportunities for New England units and solar and wind power are part of the plan.”
Other projects Sector Northern New England has initiated include wind turbine installations at the South Portland and Southwest Harbor facilities that power computers, servers and monitors at a combined 365 kilowatt hours per month, and 360 lighted buoys and 60 light houses that are energized by solar panels.

“These efforts will continue to save taxpayer’s money and protect the environment,” McPherson said. “Every day is Earth Day for the Coast Guard.”