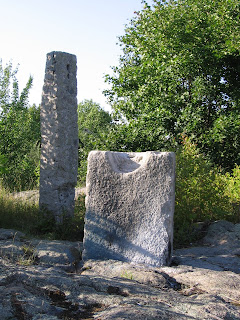 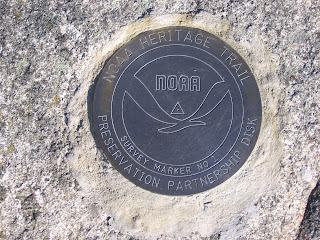 On July 2, 2005, representatives from NOAA, the National Oceanic and Atmospheric Administration, and other government officials will designate the Calais Observatory with the first Preservation Partnership disk during a ceremony in Calais, Maine. The disks are intended to encourage and promote public private partnerships, while bringing public attention to the importance of preserving the nation’s natural resources and historic sites.

“This commemorative disk is a symbol of a successful public-private partnership between NOAA and the Maine community,” said Charlie Challstrom, director of NOAA’s National Geodetic Survey. “This marker will be part of the National Spatial Reference System, which serves as the nation’s framework for latitude, longitude and elevation.”

The Preservation Partnership disks are part of NOAA’s Heritage Trail Commemorative Marker Program, which recognizes significant sites or places that represent NOAA’s heritage. The Calais Observatory was established by one of NOAA’s predecessor agencies, the Survey of the Coast. Before the use of Global Positioning Systems, the Calais Observatory provided the final piece of the first successful transatlantic longitude determination. This was a major step in ultimately establishing Greenwich as the zero point for the establishment of world-wide longitude values, affecting all nations.

The commemorative marker was set near the original site of the Calais Observatory, established in 1857. Each commemorative marker is located using GPS. The three-dimensional coordinates derived are a part of the National Spatial Reference System, which provides the foundation for transportation and communication systems, boundary and property surveys, land record systems, mapping and charting, and a multitude of scientific and engineering applications. The National Geodetic Survey establishes and maintains the National Spatial Reference System

In compliance with President Bush’s Preserve America Executive Order (E.O. 13287), NOAA is stepping up efforts to inventory, preserve and protect historic resources in the agency’s care, from shipwrecks to historic buildings. The goals of the executive order include greater shared knowledge about the Nation’s past, strengthened regional identities and local pride, increased local participation in preserving the country’s cultural and natural heritage assets, and support for the economic vitality of our communities.

NOAA, an agency of the U.S. Department of Commerce, is dedicated to enhancing economic security and national safety through research to better understand weather and climate-related events and to manage wisely the nation’s coastal and marine resources.

Excerpts from Calais, Maine – City on the Edge of Forever

Calais has seen various forms of geodetic survey work over the past 200 years! From about 1909 to 1919, the International Boundary Commission surveyed and defined the Maine-New Brunswick border as described by treaties between the two countries. The 1893 Annual Report of the Coast Survey mentions Calais’ role in the Coast Survey display at the 1893 World’s Columbian Exposition in Chicago as follows.

“On the southern edge of the floor space, and far enough from the base apparatus to admit an aisle, was located an 11 by 14 inch Dee press, on which the plate printer and his helper struck off from a small engraved copper plate prepared expressly for this purpose copies of a little chart of the St. Croix River, Maine. This exhibit always attracted a large and interested throng, and the prints were eagerly sought after. As the plate printer was plied with numerous questions and had to make frequent explanations of the process, it was impossible for him to work fast enough to supply more than a fraction of the demand. However, the office provided for this deficiency by sending on some thousands of photolithograph copies”.

With all the independent maps of America’s coastline, the determination of precise longitude in America was one of the first steps in building a 19th Century Geographic Information System, making all the Coast Survey maps relative to the world.

With the invention of the electromagnetic telegraph by Crooke and Wheatstone in England, and perfection of Samuel Morse’s version in the U.S., the Naval Observatory in Washington D.C. and the U.S. Coast Survey began experimenting with timing star passages between local meridians via electromagnetic signals over the telegraph lines. In 1851, the Harvard Observatory (the cardinal point of longitude in the U.S.) was connected to the Thomas Hill Observatory in Bangor, Maine, and the longitude difference determined there. Similar work pushed south towards Louisiana. In 1857 we saw the push from Bangor to Calais, and the setting of the stones at Calais to support the clock and telescopes, which are still on the grounds today.

William Brydone Jack, Astronomer at King’s College Observatory in New Brunswick, visited the Coast survey for the 1857 observations at Calais to view and report on the “American Method” of telegraphic longitude determination. Jack also exchanged several star signals with Fredericton. The American Method entailed a written record on a drum register showing time ticks and star signals to the hundredth of a second. Jack had only been using the “eye and ear” method as his finances did not allow for such precise equipment.

Chronograph: Recorded time ticks from the Astronomical Clock, and the star signals placed when the observer tapped a telegraph key when the star crossed the vertical wire in the telescope.

When the ship Great Eastern landed the Transatlantic Telegraph Cable in 1866 spanning the Atlantic from Ireland to Newfoundland, the Coast Survey sent two men to Calais, two to Newfoundland, and two to Ireland. The telegraphic longitude difference was determined across the Atlantic first, but the telegraph lines between Calais and Newfoundland were not good. The situation remedied itself though when a sharp December frost through the lines produced a near perfect connection! Final observations of telegraphic longitude determination were completed on December 16, 1866, at the Calais Observatory.

In 1904, longitude determined by telegraphic means encircled the Earth, closing the angle less than one second (time) from all the independently adjusted observations. Before telegraphic longitude, “time” was physically transported between Liverpool and Boston via “chronometer crossings” on steamers. Later advances included time via wireless telegraphy, and then shortwave time signals. The shortwave method did not require meridian differences to be determined, as Greenwich Mean Time was provided directly to the survey station site. It is interesting to note that some sort of optical astronomical observations were still needed up until the advent of the 1980’s Navstar GPS system of satellites.

Harold E. Nelson ( harold.nelson@state.me.us ) is a 25 year employee of the Maine Department of Transportation’s Photogrammetry and Control Unit. He is currently assigned to processing, adjusting, and integrating the Unit’s precise GPS surveys with terrestrial surveys of other departmental units. The Unit also has led the way nationwide in Airborne GPS photogrammetric mapping procedures, one of which will be done for Calais. Mr. Nelson is proposing that the City of Calais obtain the property known as the Calais Observatory and create a “Meridian Park”, recognizing the site on the National Historic Register, and setting up historical informational markers. He considers this site is as important to the surveying and mapping community, as the Golden Spike is to the railroad industry.

CALO Panorama: Calais Observatory. The tall stone probably was the mounting for the Hardy Astronomical clock. A pendulum dipped in a pool of mercury in an iron jar which created the time ticks on the chronograph.