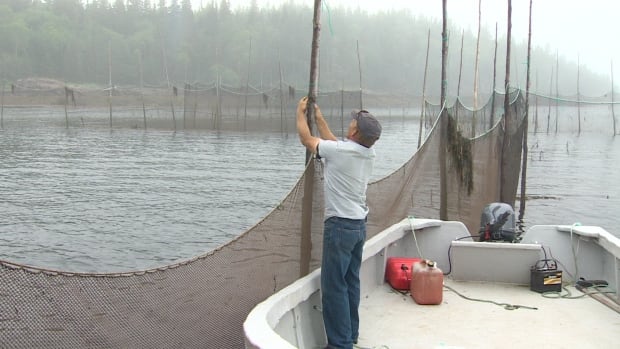 Dan Cunningham used to have two weirs along the Fundy Isles. Now he only has one. (CBC News)

Some fishermen in the Bay of Fundy are worried the centuries-old herring weir fishery could be coming to an end because of a lack of fish.

Dan Cunningham is one of those fishermen.  He says
over the past six years he has noticed a steady decline in the amount of herring.

Last summer, weir fishermen only landed a quarter of what they caught the year before. They say this year is even worse.

“This year seems to be the worst that we’ve seen. There
has been a downward spiral and this year the herring haven’t migrated here in the Fundy Isles region,” says Cunningham. 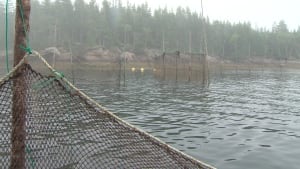 Weirs are set up to draw the herring in at high tide. Then, when the herring are in, it plays on their swimming patterns to keep them in the trap. (CBC News)

“Six years with no fish in an area that has a reputation of being the herring capital is cause for concern.”

Cunningham says seven years ago fishing was good, and there were approximately 80 different weir fishermen. Now there’s only a dozen.

“Am I going to be the last generation of fishermen to come out and ply these waters for herring?” said Cunningham.

The fish seem to be still in the bay.  Purse seiners, which fish in deeper water farther from shore are still catching them.

Rabindra Singh is an assessment biologist with the Departm

ent of Fisheries and Oceans. He says the herring are around, they just aren’t going into the weirs. He isn’t sure why.

“Nobody knows for sure. There may be a number of factors that are at play here. Some of it may have to do with environmental factors, so we’re not really sure.”

Weir fishermen aren’t the only ones seeing a change with the herring. 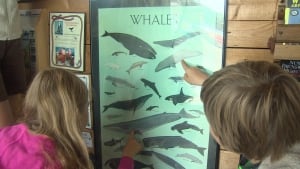 Herring are important to many whales’ diets. Some whales eat herring for nutrients, but if there aren’t any there to eat, it could result in less whales. (CBC News)

Joanne Carney is one of the owners of Jolly Breeze Tall Ship Whale Watching in St. Andrews. She says some whales rely on herring for nutrients, and the lack of herring could mean thinner, and even fewer whales.

“It has meant fewer whales in our area unfortunately. Luckily we’re still seeing whales about 90 per cent of trips so our customers are happy, but it concerns us as whale watchers especially in the future going forward,” said Carney.

While Dan Cunningham hopes it’s a natural occurrence and the trend will reverse, he wants answers in the meantime.

“What we would hope is that someone will put the effort in. Are we in a migration problem? Are we in a stock problem? After six years in a decline of any fishery, I think everybody gets a little nervous.”